Katie Price recently jetted off on a romantic holiday with boyfriend Kris Boyson – despite being due in court on Wednesday morning.

But now it looks like the mum-of-five is returning very soon as she’s teased fans with an exciting new project.

In a clip shared on Instagram, 40-year-old KP can be seen pouting outside her Sussex mansion while dressed in a black jumpsuit.

With her long blonde hair styled in a plait, the reality star finished the look with an oversized pair of sunglasses and a designer bag.

A second video shows Pricey filming herself inside her home while her youngest kids are screaming in the background.

Katie’s hallway can be seen in the background of the snap, which features a pile of decorative suitcases, wooden staircase and a giant canvas of her own face. Standard… 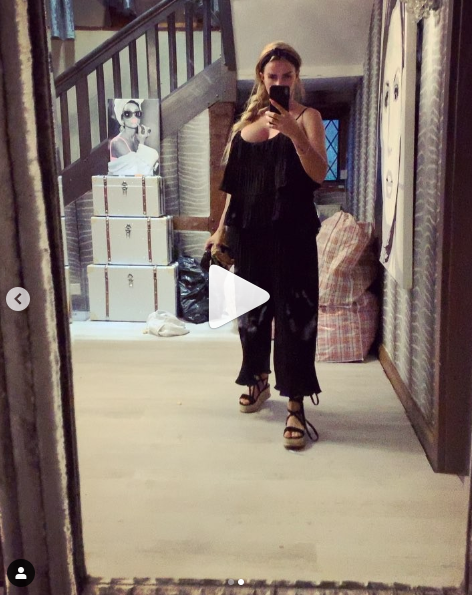 Hinting that something big is coming up in her schedule, the former Loose Women panellist wrote, “#Priceysback Full day of meetings… watch this space! 💋”

And fans of the star couldn’t wait to comment, with one saying, “Still got it ❤️”

“Looking good!,” said another, while a third added, “You always bounce back babe ❤️”

This comes after Katie was blasted as ‘disrespectful’ by a judge after she failed to show up for her court hearing earlier this week.

The CBB star is facing two separate charges for ‘using threatening words or behaviour likely to cause harassment, alarm or distress’, after allegedly causing a scene outside her kids’ school gates in September.

While picking up Jett, five, and Bunny, four – who she shares with ex Kieran Hayler – Katie is said to have approached Kieran’s new girlfriend Michelle Pentecost, before yelling, “Are you enjoying f***ing my husband?”

But despite the charges, it seems as though KP isn’t too phased, with a source now revealing she ‘had no idea’ she was supposed to be in court.

“Katie is very relaxed about the whole thing,” a source told The Sun.

“She’s told friends: ‘They can’t put me away for swearing,’ and says she’ll sort it out when she’s back from Thailand.”

The insider continued, “She’s dodged jail twice this year – she thinks she can do the hat-trick and go unpunished again. She doesn’t want anything to ruin her holiday so she’s not going to worry about it until she’s back.”

According to the publication, another source added, “She had no idea she was supposed to be in court that day and her lawyers had actually asked for it to be rescheduled to next week and thought it had been.”