Skip to content »
The Duke and Duchess of Cambridge announced they were expecting their third baby last week, creating a sense of excitment across the globe.
The couple announced the happy news early when the Duchess was taken ill with the extreme morning sickness condition, Hyperemesis Gravidarum, and was forced to cancel an official royal engagement.

It’s thought that the Duchess is only just between eight and 12 weeks pregnant, explaining why the pair were originally planning to announce the news a little later on.

But despite the fact that Catherine is so early on in her pregnancy, it seems she’s already thinking about how she plans to deliver the baby. And reportedly, she’s preparing to echo old royal traditions with the heir to the throne, by having her child at home at Kensington Palace.

According to sources, she was originally keen to have home births with both Prince George and Princess Charlotte, but was denied her wish both times as doctors thought it would be too risky for the future Queen of England.

The source explains, “The Duchess knew it wasn’t possible for her first baby to be born at home, but she asked for a home birth for the second. Officials and doctors thought it too risky. There was concern and in the end she decided against it.” 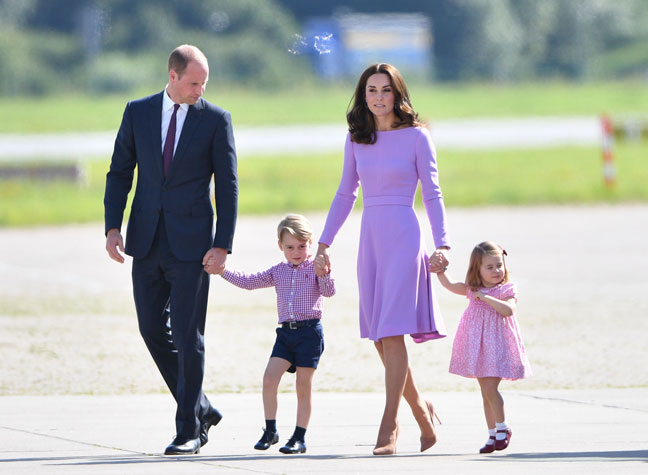 With both of her two children, Catherine had relatively easy births, despite difficult pregnancies. For example, she was in labour for just two hours with Princess Charlotte, who was born at 8.34am on 2nd May.

And if the Duke and Duchess of Cambridge do decide that they’ll be having a home birth for their third baby, the pair will be reverting back to staunch royal traditions of giving birth at home. The Queen had all four of her children at home, at one of her residences, Buckingham Palace. Queen Victoria was also born at Kensington Palace, which is now the home of Catherine and William.

However, both Prince William and Prince Harry were born in a hospital, in St. Mary’s in Paddington. Catherine herself was also born in the Royal Berkshire Hospital in Reading, so if she does choose to give birth at home, it’ll certainly be a first for the both of them.

The news comes amid the revelation that the Duchess reportedly had to persuade Prince William to have a third child.

According to reports, Catherine was always keen to make another addition to the family, but had to convince William that it would be the right idea for their family.A royal insider told the Sunday Express, “Kate always wanted more than two children, it was William who needed to be persuaded.

“As one of three, Kate wanted at least three. William was more reluctant, not just because he was one of two, but because George was quite a difficult baby.

“Then they had Charlotte and she was a lot easier. Now the idea of a newborn doesn’t seem half as challenging, they’ve done it twice before and they’ve got all their staff in place.”

However the pair decided on third baby, we can’t wait to see him/her!