Recently, the Queen stepped out for a lavish birthday dinner at elegant London restaurant The Ivy, to celebrate a cherished friend’s 80th birthday.

The Queen and Prince Philip were out with a group of friends to celebrate the Archduchess Helen of Austria’s special day. The royal is clearly a close friend of the royal family, given that she is also Prince Philip’s cousin.

The monarch’s venture out into the heart of the capital was a rare sighting, given the fact that, remarkably, it’s the first time she has dined out since 2015. So she made sure to dress up for the special occassion, looking elegant in a silver embellished dress and a delicate patterened shawl.

The Queen walked into the five-star restaurant carrying her trusty black Launer handbag, but left with a rather more unique purse, displaying a picture of a young woman and two young children.

It first appeared that the small, vintage-looking black and white purse was displaying the image of the Queen’s late sister Princess Margaret, who died in 2002, and her children. 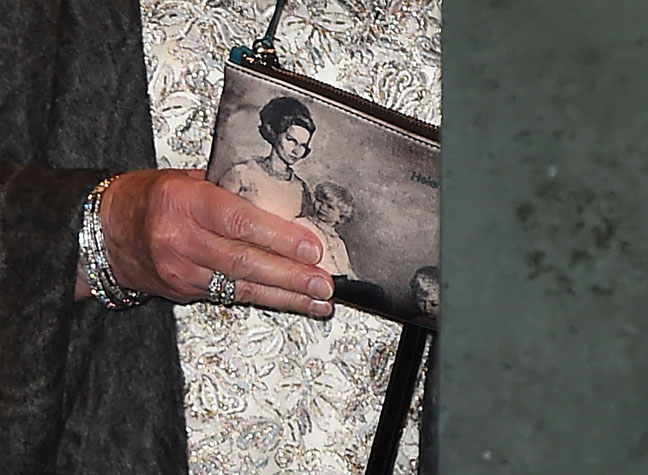 But confusion soon arose around the front of the purse, as royal watchers began to speculate if it really did show a picture of Princess Margaret, given the fact that there are also two boys displayed – when Princess Margaret only had one son, David Armstrong-Jones, and a daughter, Lady Sarah Chatto.

On further inspection, it can also be see that the purse displays the name Helen, too.

Given that the Queen had just left the birthday party of Archduchess Helen, many are coming to the conclusion that the personalised item in fact shows a picture of her and her two children instead.

Reportedly, the coin purse was gifted from Helen to her guests as a birthday treat. Aww.

According to the Daily Mail, Helen – also known as Helen of Hepsburg – is a part of the ‘inner circle’ of the Europe’s reigning royalty, as her mother was the late Princess Elizabeth of Greece.

She was a close friend of the Queen’s later sister, Princess Margaret, and is well known to most of the British royal family, including Princess Anne and, of course, the Queen herself.

From Woman & Home, our sister site.