Heiress Tamara Ecclestone and husband Jay Rutland have invited camera’s into their ‘world’ – but their parenting decision to breastfeed their three-year-old daughter Sophia, nicknamed ‘FiFi’, has left viewers baffled. The hour-long show went behind closed doors to reveal a peek into the Formula one heiress’ lavish 57-room mansion.

Talking to the Loose Women panellists recently, the mum explained it was a ‘big decision’ to let cameras back into their lives.

But that, after the success of the ITVBe show Seven Days with…. Tamara Ecclestone they did when Sophia was just three days old they couldn’t not do it.

‘I loved looking back to when she was tiny – it was like the fanciest home video ever,’ said the mum-of-one.

However, it wasn’t Tamara’s overindulgent Chanel shoe collection or all-serving butler that stunned viewers but her parenting decisions. Mainly, that the mum-of-one still breastfeeds her three-year-old daughter, Sophia.

Previously Tamara has been very open about this particular parenting decision, telling fans: ‘As soon as Fifi was born she headed straight to the boob!

‘For her it’s such a natural thing and it’s something that just carries on,’ she continued. 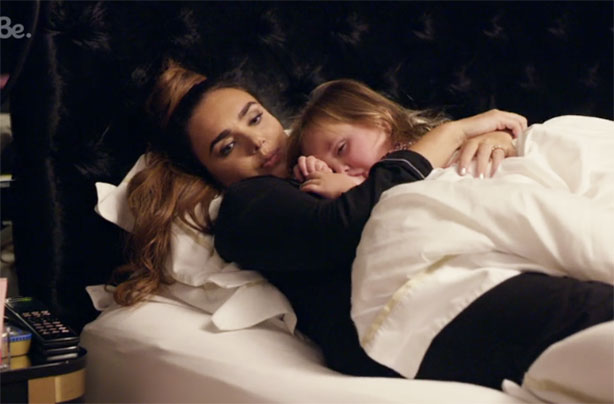 And Tamara’s husband Jay Rutland, 36, supports his wife explaining: “She believes in breastfeeding, she believes quite passionately in it. I support her in anything she wants to do.

“I think she’s doing the right thing,” he added.

“It’s not just about food, it’s about comfort and I think that’s really important for mother and child,” Tamara insisted. “It’s the right thing for me and Fifi and you just have to get on with it and not care about what anyone else thinks.”

But viewers took to Twitter to debate her parenting techniques. One didn’t hold back with their post: ‘Breastfeeding at three-years-old? Really?’

This viewer was torn over her opinon: “I really love the free thinking @tamaraeccle but… I do think 3/4 is just too old sorry to anyone that disagrees #TamarasWorld”

While a third tweeted simply: “Never seen such a smothering mother in my life.”

But not everyone was against the heiress, with some defending her decision: ‘#tamarasworld if it’s not your boob keep it zipped’ defended one viewer.

While another joked: “#TamarasWorld people loosing their minds over her breast feeding.. who cares. I cant get over the fact she keeps her bread in the fridge?’

What do you think? Is three-years-old too old? Let us know in the comments box below.

FROM: GoodToKnow, our sister site. Written by Stephanie Lowe.