Kate Middleton and Prince William’s little girl is now a student at Willcocks Nursery, which is just a short walk from the family’s home in London. 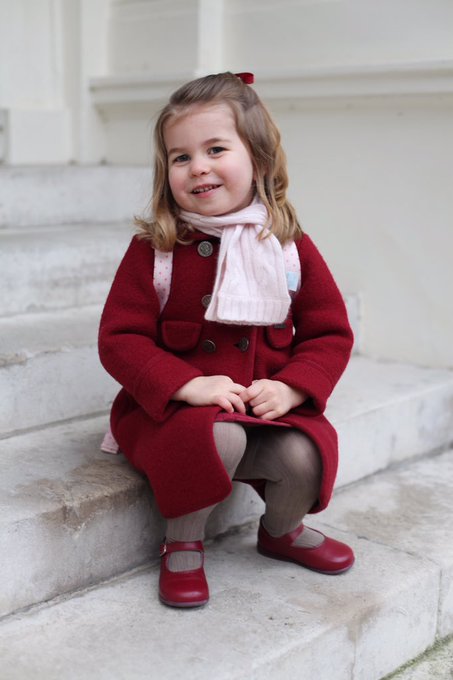 To mark the occasion, a set of photographs have been released by the Duke and Duchess of Cambridge via the Kensington Palace Twitter account – and as you’d expect, they’re totally adorable.
The two-year-old is seen wearing a red coat with a matching red shoes and red bow. Her adorable outfit is completed with brown tights and a white scarf.

‘So so adorable. Beautiful little girl. 🙏’, said one follower, with another adding: ‘OH my…she’s just darling!!! Hope her first day was wonderful!’

The adorable images were taken by The Duchess shortly before Princess Charlotte left Kensington Palace for her first day of nursery at the Willcocks Nursery School.

Charlotte’s proud parents are believed to have joined her for part of the day to ensure that the youngster settled in.

Described as ‘traditional’ on their website, Willcocks Nursery is run by Lavinia Taylor and all of the staff members are women. A focus is put on teaching pupils the importance of good manners.

‘We are delighted that The Duke and Duchess of Cambridge have chosen the Willcocks Nursery School for Princess Charlotte,’ a statement from the nursery said.

‘We look forward to welcoming Charlotte to our nursery in January.’

Fees for each term start at £3050 for morning sessions and £1800 for afternoon students. Prospective parents are encouraged to make an appointment to view the school and are charged a registration fee to ensure their child is added to the waiting list.

The Duke and Duchess of Cambridge’s son Prince George started his education at a different facility, attending the modestly-priced Westacre Montessori in Norfolk.

Both Prince William and Prince Harry attended Montessori nurseries and their late mother Diana worked as an assistant at one before becoming Prince Charles’ wife.

FROM our sister site, GoodToKnow. Written by Rachael Martin.