It’s Prince George first day of school today and the four-year-old will be meeting his teachers and new classmates for the first time this morning.

Dressed in the smart uniform of Thomas’s Battersea school, including navy shorts and a V-neck jumper, ankle socks and sensible black shoes, Prince George looked shy and a little nervous as he arrived at the preparatory school in south-west London with his father, Prince William.

It was announced earlier this week that Kate was pregnant with her third child. And, as a result, is once again suffering from the acute form of morning sickness that plagued her first two pregnancies, Hyperemesis Gravidarum.

The debilitating condition has forced Kate to pull out of two public engagements this week and left her too poorly to take her eldest to school on his big first day.

The Duchess of Cambridge predicted back in March that George, ‘won’t know what hit him’ when he starts school, and the young royal certainly looked a but unsure by William’s side this morning. 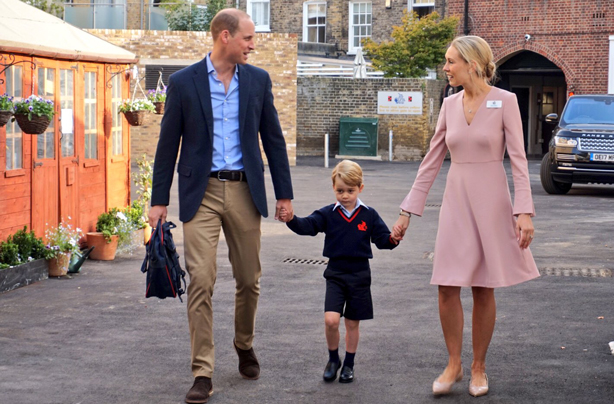 Prince George was welcomed to his new school this morning by the Head of Lower School who exchanged a few words with Prince William before showing them inside and taking George to his reception classroom.

When looking at everything we know about Prince George’s primary school so far, it seems that the cheeky four-year-old will be in good hands as he adjusts to life at school.

Thomas’s Battersea school is described by the Good Schools Guide as, “A big, busy, slightly chaotic school for cosmopolitan parents who want their children to have the best English education money can buy.”

FROM: Our sister site, GoodtoKnow.