Holly Willoughby and Phillip Schofield were left shocked on This Morning today, when Vanessa Feltz gave some surprising advice to a struggling mum.

The drama started when a lady named Karen called the popular TV show to ask what she should do about her partner ignoring his duties as a dad to their newborn baby.

She said, “Am I being unreasonable in telling my partner to step up and be a dad or get out of my life? We live apart, have a three-month-old baby.

“He never comes over to see him, he ignores me when I call him, I have another son so it’s very hard to do everything. I just get on with it. Am I being unfair giving him an ultimatum?”

Despite earning her name as a no-nonsense radio presenter, 57-year-old Vanessa insisted that Karen should give her partner a second chance.

Speaking to the caller, she said, “Well the baby’s only three months old so there are dads and mums that find it very hard to bond with a new baby.

“But one the child’s a little bit older they really do get into much more of a relaxed gig. Lots of people of all sexes say ‘I don’t very much like new babies’. So I’d give a longer chance.”

Phillip, 57, then interjected, “But they live apart,” before Vanessa suggested the woman should wait a whole 18 months before making any rash decisions about their relationship.

Clearly taken aback by the way the conversation had gone, 38-year-old Holly – who shares kids Harry, nine, Belle, eight, and four-year-old Chester with husband Dan Baldwin – then went on to give her own advice.

She said, “I just think that when you’ve got a three-month-old baby and you’re exhausted and you’re doing everything on your own, the hurt and pain… 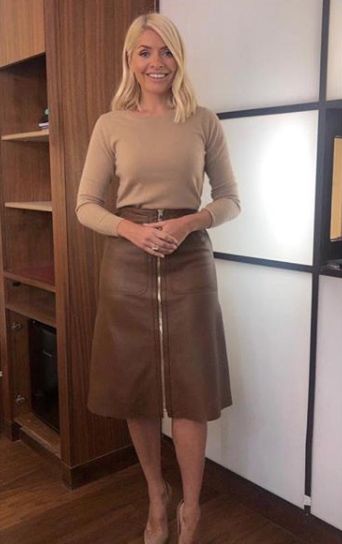 “I get that you don’t want to close the door because it’s so important for the child to have a relationship with their father – I get that.”

Vanessa then hit back, “Give him a chance to step up,” as a confused-looking Holly replied, “But to keep trying to organise picnics?”

Phillip then supported his on-screen telly partner, as he chipped in, “It would be great if he could become a dad. But after six months? Biff him!”