During last night’s National Television Awards, This Morning picked up it’s ninth gong in a row as it won Best Daytime Show.

So it’s only right that presenters Holly Willoughby and Phillip Schofield celebrated another successful year by partying with the rest of their celeb pals.

Unfortunately for these two, they had to get up pretty early today to present the much-loved telly show, and let’s just say they weren’t feeling their best.

In fact, as 10.30am dawned, Alison Hammond was left to hold down the fort for a few minutes, telling viewers, “Phillip and Holly are missing but don’t worry I’m here to guide you through the show.” 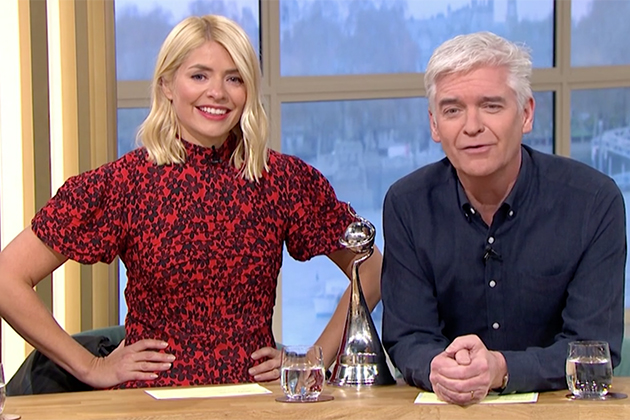 But it wasn’t long before Holly and Phil made their dramatic entrance on motorbikes, donned in full leather and safety helmets.

Clearly struggling from the night before, 56-year-old Phillip said, “I might have to be sick in my helmet I think!”

Holly, 37, replied to her TV husband, “What an amazing night…Thank you so so so much! Come on, we can do this together.”

Phillip said, “You do it… I’m worse than you this year!”

After watching footage of them winning last night, the silver fox then thanked fans for their support, as he continued, “We never take it for granted, and we are so so grateful.

“It means so much to us, but it also means so much for our team – they were spread all over the place last night, some in the arena, some were watching it in bars, so for our team here in the studio and back in the office – this is yours guys, you are absolutely the best and thank you.” 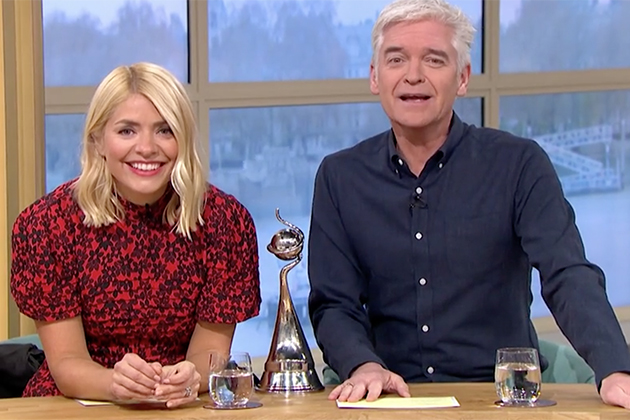 When Holly then went on to talk about about their ‘emotional night’, Phillip joked, “You get very chatty when you’re hungover!”

And fans found the whole thing hilarious, as one wrote, “You guys should come in hungover more often, i haven’t laughed this much in ages!!! 😂😂”

“Great show this morning,” said another, while a third joked, “A well deserved win – may your hangovers be kind – if not keep going 😝😝😝”

This comes after the presenting duo were photographed swigging from a hipflask backstage at the NTAs following their big win. No wonder they had sore heads!

But things weren’t quite as bad as 2017 when Holly and Phil turned up to film This Morning in their clothes from the night before and still a little bit woozy. Get yourself some paracetamol, guys!