Holly Willoughby’s lookalike mum’s birthday is today – but you’ll never guess how old she is! 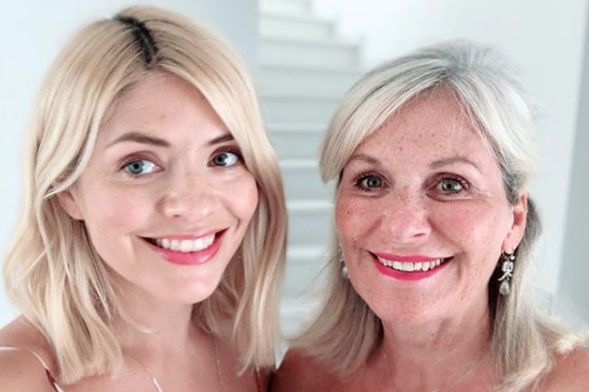 Holly’s sister Kelly posted a picture of their mum Linda blowing out a cake on Instagram with the caption, “Early morning cake!

Holly was quick to comment with, “Ooh that’s a lot!”

Fans couldn’t believe that the glamorous mama was 71 with one commenting, “She looks so much younger.”

An hour later Holly also paid tribute to her mum on Instagram with a gorgeous photo, which she captioned, “This beauty turned 71 today! Happy birthday mama… love you so much.”

Linda was wearing a pretty floral tea dress – so you can see where Holly, 38, gets her fashion sense from.

Meanwhile, the This Morning presenter was left red-faced after being asked a rather risqué question by Keith Lemon on Celebrity Juice.

She was quizzed on whether or not she had ever had an encounter with another woman.

Flustered Holly said “no” but the rest of the panel, including Mel B, didn’t believe her.

Shocked by the her remark, Holly squealed, “Mel!” prompting Mel to joke, “Your voice has gone really high!”

And in a high-pitched voice, Holly added, “No, what do you mean?”

Keith then turned to the camera and said, “I think Holly has answered the question there,” prompting to her to put her head in her hands.

Holly is married to producer Dan Baldwin and they have three children, Belle, eight, Harry, 10 and Chester, four.

She recently opened up about the challenges of raising children.

Holly told The Sun, “My biggest challenge over the next few years will be parenting my children as they get older.

“My main focus over the next few years is churning out three very grounded, normal, happy, content children, teenagers and adults, eventually. That’s my greatest job I’ll ever do.”

She added of her career, “I don’t really want to do more, I just want to pause everything and keep everything as it is.”