Two time Rear Of The Year winner Carol Vorderman has taken to Twitter to share her bum-building tips with fans. 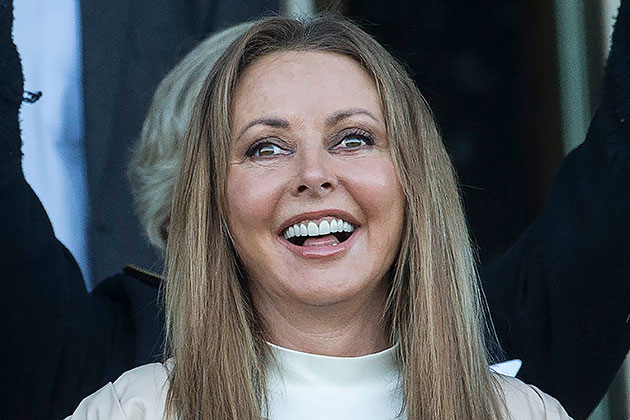 Posing in tight, black leggings and a matching workout top, the 58-year-old former Countdown star bent into a series of positions, demonstrating how she achieves her signature curves in the gym.

Read More: Carol Vorderman hits back at cruel trolls with this SASSY response after flaunting her famous rear

Balancing on a piece of equipment, the maths wiz snapped pics as she worked to tone her figure, Tweeting the photos alongside the caption, “My favourite machine…could stay on this one for hours….MAHOOSIVE stretch thing….Bliss.”

One follower replied to the post, asking the I’m A Celeb star for some fitness tips, “What this one good for carol?” to which she responded, “Back, hamstrings, core… stretching it all out.”

Mum-of-two Carol even showed off some snapshots as she worked out her pins, posing on the leg press as she pushed some rather heavy looking weights.

Next to the sweaty snaps, she penned, “Now that’s a big weight….Heck…”

Many fans were quick to send Carol some super complimentary messages in response to the posts, with one writing, “What an amazing figure Carol. Keep those workouts going,” while another added, “How fit are you? Wow wow wow!!”

This isn’t the first time Carol has shared a glimpse into her fitness regime, she took to Twitter again recently to post some saucy throwback photos.

Posing in a pair of lacy knickers and a workout vest in a picture taken two years ago, the telly star penned, “Keep on moving no matter what your age… Gym at home a couple of summers ago #56yo #swimming #weights#ScruffyHomeGymGear.”