It’s the Strictly romance rumour that just won’t go away. Since the beginning of this year’s Strictly Come Dancing, speculation that professional dancer Gorka Marquez and contest Gemma Atkinson are dating has surrounded the pair, who are both currently single.

Addressing the alleged ‘Strictly curse’ at the beginning of the competition, Gemma even admitted that she’d welcome a boyfriend, given that she’s been single for a long time.

She said, “I’ve been single ages so there wouldn’t be any curse for me. It would be a blessing.”

But now, according to The Sun, it’s rumoured that the budding relationship between the two Strictly stars is actually causing a little friction between Gorka and his celebrity partner, Alexandra Burke.

The publication have stated that Alexandra is reportedly “furious” about the pairing. 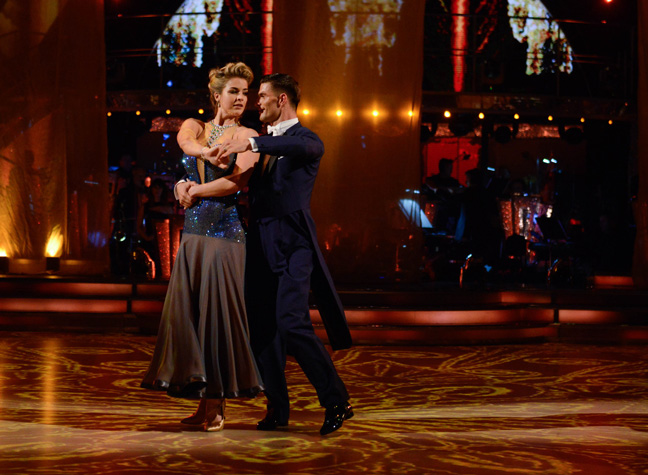 (Gemma with her professional partner Aljaz)

A show insider allegedly claimed, “Gorka and Gemma are together. It’s the talk of the make-up room.

“Not surprisingly, Alexandra is furious about how it might impact her chances of winning. She’s very ambitious and is nervous about it all.”

While no such romance, nor Alexandra’s feelings about the couple, has officially been confirmed, it’s true that Gorka and Gemma have been spending time together outside of the Strictly ballroom.

Reportedly, the pair, as fitness fanatics, enjoy going to the gym together, and have both posted fun selfies and videos on their social media of their work-out trips. “At this point she wouldn’t describe him as her boyfriend because they haven’t spent enough time together as they’re both focused on rehearsing.

“But they go to the gym together to work out which is really sweet because it’s something they both love to do.”

But it seems Gorka and Alexandra have also been getting on like a house on fire recently too.

Just a few days ago, the pair headed to watch the West End production of Annie together, starring Strictly judge Craig Revel-Horwood.

Let’s hope there really is no drama between the three Strictly stars!

FROM: Our sister site, Woman&Home. Written by Amy Hunt.